The amount of electricity a solar panel produces depends on three important factors: the size of the panel, the efficiency of the solar cells inside, and the amount of sunlight the panel gets.

We’ll break down what you can expect from a typical solar panel, and how that power output compares to the power you need for the gadgets and appliances you use inside your home. 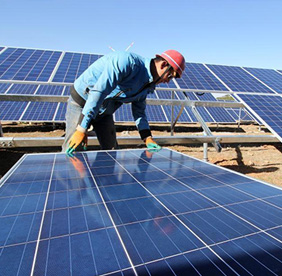 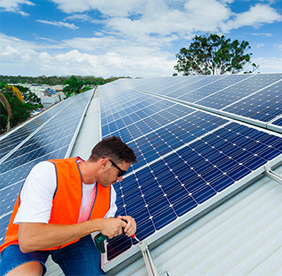 How big are solar panels?

When we say “solar panel,” what we’re talking about is a typical silicon photovoltaic panel for residential use. These days, most solar panels are about 5 and a half feet tall and a little more than 3 feet wide:

If you look closely at the solar panel in the image above, you’ll notice 60 little squares. These squares are actually individual solar “cells,” which are linked together by wires. The cells are where electricity is made, and the wires carry the electricity to a junction box where the panel is hooked into a larger array.

Why does solar panel size matter?

The more solar cells working in tandem, the more power they’ll create. That’s why the size of the panel matters if you’re trying to calculate how much electricity a panel makes.

Solar panels have been about this size for decades, but modern panels make more electricity than in the past. That’s because panel manufacturers have found ways to improve cell efficiency over time. 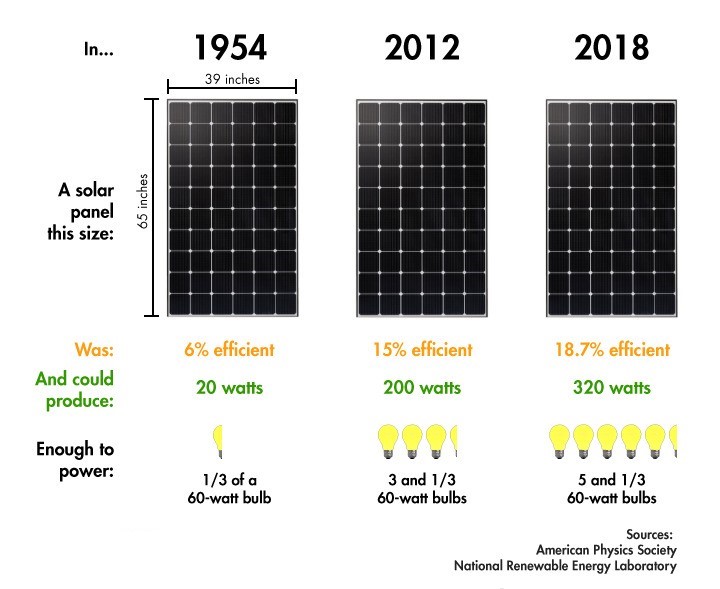 How efficient are solar panels?

Solar efficiency relates to the amount of available energy from the sun that gets converted into electricity.

Back in the 1950s, the first solar cells were capable of taking 6% of the energy from the sun and converting it into electricity.

If they were configured to be the same array of 60 cells you see in the image above, that would have created a current of about 20 watts electricity, about a third of what would be needed to light up a 60 watt incandescent bulb.

When we originally wrote this page in 2012, solar cells could convert 15% of the energy hitting them from the sun into power. As of 2018, the efficiency of the most advanced solar cells is closer to 23%, while average solar cells for residential use are around 18.7% efficient.

If you combine the efficiency of the cells with the size of the panel, you get a number called the “power rating.” In the solar industry, we say “that panel is rated to produce X watts.”

What’s the power rating for an average solar panel?
As of 2018, a typical solar panel produces around 320 watts of power, but panels come in many different wattage ratings, and finding one that produces exactly 320 watts is rare. The top 10 residential solar panels for 2018 includes panels rated to produce anywhere from 290 watts to 360 watts.

More efficient panels are a little more expensive, and are usually only needed if you have limited space on your roof.

Your solar installer will work with you to figure out how many panels you need to produce enough energy for you to use.

It generally matters less how much each panel can produce than how well the whole array performs.
Solar panel output per day and per month
Using the example above of a 250-watt STC rated panel, if you multiply the 250 watts the panel produces by the number of hours of full sun you get in a day, you’ll get the amount of kwh that panel produces per day. Multiply by 30 days and you’ll get mothly kWh output for the panel.

The average roof in the United States gets about 4 hours of usable sun per day. We know the sun shines more than 4 hours, but “full sun” is a measurement that combines all the parts of the day when the sun is lower in the sky into one number.

If you multiply 1kWh per panel by 30 days in a month, you’ll find that each 250 watt rated panel will produce about 30 kWh in an average month.

How much energy does a solar panel produce per square foot?

The average-sized solar panel takes up an area of 17.6 square feet and produces 265 watts under direct sunlight. That translates to just over 15 watts per square foot.

How many solar panels are needed to power an average house?

Sizing a solar panel system to your home’s electric usage can be done by taking look at your energy bills over a year.

Most utility companies provide information about your last few months of usage on your bill, but you can probably get more on their website. A few lucky customers get a year and a half like this:

We’ll spare you the trouble of averaging that column, and tell you that this house uses about 2,200 kWh per month. That’s quite a bit higher than the national average, which means the homeowner could really be helped by solar power!

Typically, homeowners in the United States use about 900 kWh a month on average. So, take 900 kWh and divide by the amount of kWh one solar panel produces over the course of a month (30kWh), and you get a 30 panel installation. 30 panels x 250 watts per panel equals a 7,500 watt system (7.5kW).

Again though, these are just rough estimates. It’s best to connect with an expert we trust near you who can appropriately size a system and help take advantage of all the local incentives to get it done right and as affordably as possible.

How much power do my devices use?

There’s huge variation in power use between households depending on what you own and how often you use everything. People in the South and West United States tend to use more electricity for heating and air conditioning, whereas people in the North and East tend to heat with gas or fuel oil.

The average home in the US uses about 1,000 kWh of electricity per month. All those little devices add up to big usage, with variations by season. Usage also varies between day and night. Unless you work at home, most of your electricity usage probably happens at night.

On or off the grid?

Since solar panels only generate power as the sun shines, you’ll need a way to store the energy. Though it’s possible to use a battery for storage, the easiest (and cheapest) solution for most people is to stay connected to the grid.

If your solar panels are producing more energy than you’re using—when you’re at work, on vacation, or just not running many devices—excess power will flow back into the grid. In many locations, utility companies offer a program called “net metering” that can compensate you for extra power you produce.

At night, or anytime you need extra power, you’ll pull it from the grid. With a grid-connected system, you’ll never need to worry if you happen to need more power than your solar system has been sized to provide. You may also choose to supply only part of your average electricity bill with solar, and use the grid for the rest. 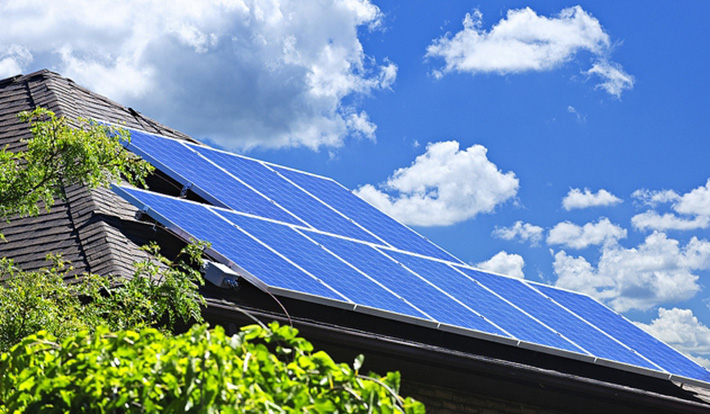 Your solar installer will talk to you about all of the options. Interested in getting a quote?
Get a Quote! 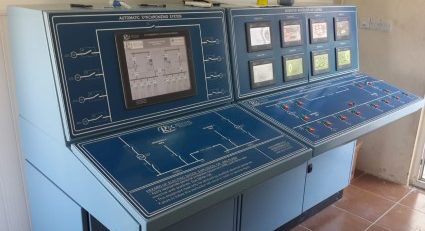 General Control & Synchronization Panel Synchronizing panel will operate on an automatic mains failure system, so that when the main supply... read more 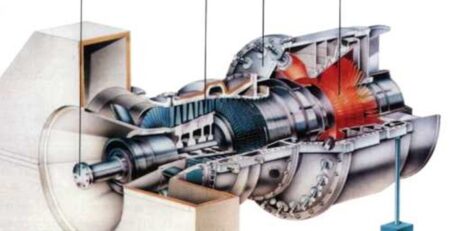 Gas Turbine for Power Generation: Introduction The use of gas turbines for generating electricity dates back to 1939. Today, gas... read more